Recently, I posted stories about Tour Players Bobby Locke from South Africa and Max Faulkner from England who both had amazing careers, and I realized that there are other highly successful players from the past who need to be remembered.  Here is #3 in this series.

Dave Thomas was one of Britain’s great golfers during the 1950s and ’60s. Thomas won more than a dozen tournaments in Britain and around Europe, including the French Open and the Dutch Open. He lost the British Open in a playoff with Peter Thompson in 1958 at Royal Lythan, and finished runner-up at the 1966 Open, 1 stroke behind Jack Nicklaus. Pretty awesome!

Thomas didn’t have the same success when he tried competing in the USA, but spectators admired his long, straight drives. He finished second in the St. Paul Open and won a qualifying tournament for the U.S. Open in 1964.

What amazed me was that after he retired from playing, with health problems, he set up a golf course design business. Thomas designed over 100 courses, including PGA National courses at Ryder Cup venue The Belfry.

What a lot of my family and friends don’t know, is I had a picture of Dave Thomas on my bedroom wall while I was still an amateur.  I didn’t know a lot about him, but the picture of his powerful swing inspired me to be a better golfer! 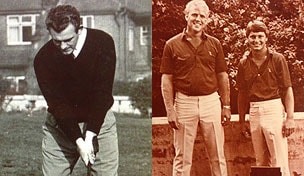